Although it didn’t win, my flash story “Perfect” placed among the top ten in the Golden Donut contest sponsored by the Writers Police Academy. According to Lee Lofland’s blog, they received “a mountain of entries.”
(http://www.leelofland.com/wordpress/the-winner-of-the-2013-golden-donut-short-story-contest-is/) 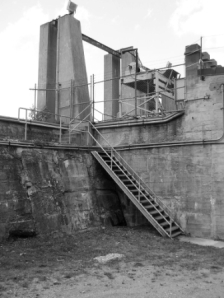 The directions seemed easy enough: a story based on the photo above.But the story had to be exactly 200 words, including the title. Contractions counted as two words. Not so easy, after all. But a fun challenge.

She got out and looked over the chain link fence at the deep concrete hole surrounded by crumbling bunker like towers. “This is it. It is just what I have been looking for. It has that great post apocalyptic look. It will make my movie perfect.”

What she had been looking for? Her movie? He had given her the idea. He had used his car to drive her down every godforsaken lane seeking the “perfect” setting.

He shrugged. “A swimming pool for a giant?”

He pried it open with a tire iron, and watched as she teetered on the top step in her ludicrously high heels. The sight of the stupid red soles indicating the shoes cost triple his weekly salary tipped him over the edge. So he tipped her over the edge.

She landed at the bottom, her neck twisted at an angle natural only to an owl. He dragged the body under the staircase. As he drove away, he thought, “She was right. It was perfect.”